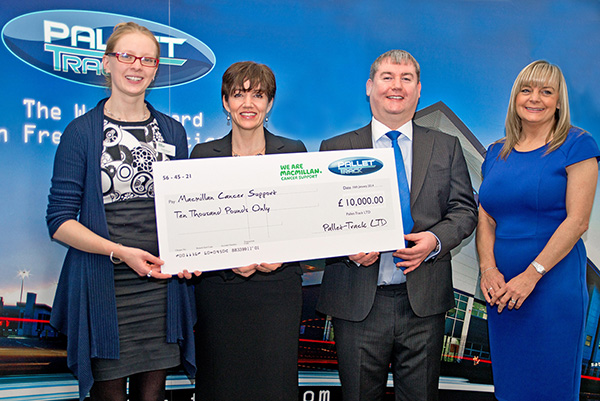 Employees & shareholder members at the successful pallet network organisation based in Millfields Road have raised thousands of pounds for the charities they have partnered since the company opened for business on 30th January 2004.

To mark the special anniversary year, the staff members at Pallet-Track elected Macmillan Cancer Support as its charity partner for 2013 and through a UK-wide infrastructure of more than 70 shareholder members have raised £3,010 at its annual gala dinner – one of Pallet-Track gala’s sponsors Towergate Insurance Stoke decided to match the monies raised and also make a donation to the charity as part of the celebration.

Managing director Nigel Parkes said: “We have been involved with a lot of important causes and this anniversary year we partnered with Macmillan Cancer Support as our chosen charity partner. It has been very well supported by our network and staff members and we decided to increase our donation to £10,000 which was representative of our anniversary celebration.”

“We understand that while the donation hasn’t been restricted to a current project, it is likely to go to Wolverhampton-based initiatives, which is great news for the city where we live and work.” Nigel Parkes commented.

“With the number of people living with cancer expected to double to four million by 2030, for Macmillan to be there every step of the way requires support. It’s a pleasure to work with Pallet-Track and its fundraising means a huge amount to Macmillan, helping us make sure no one faces cancer alone,” said Emily Morgan.

Last year Macmillan managed to raise a record breaking £1.7 million in Birmingham and the Black Country which will be used to help countless people who are currently affected by cancer in the area. One in four people currently face cancer alone and thanks to public support, the charity will now be able to recruit more health professionals, provide more grants, start additional support groups and reach more people with its free support line.

Nigel Parkes who is soon to announce the company’s chosen charity partner for 2014, added: “Most of us have either been affected by cancer, or known someone who has. The enthusiasm from our shareholders and members of staff has meant a lot to me and our management team – we especially enjoyed the Macmillan Coffee Morning.”

“2014 has got off to a good start and we would like to thank all of our shareholder members and sponsors for supporting us so generously, not just this year, but in previous years when our charity partners have included Birmingham Children’s Hospital, Promise Dreams and Acorns children’s hospice. We have also supported smaller, local charities such as the Good Shepherd and the Jeshanah Gate, which both help the homeless in Wolverhampton.”

In August 2013, as part of the Pallet-Track FLT Driver Challenge, the company raised over £1000 for a parent chair bed at New Cross Hospital and also supported the ‘Wear it Pink’ Day – an awareness campaign for breast cancer. Staff also supported individual causes including the YMCA Sleep Easy campaign, the Race for Life and the John Taylor Hospice.

Pallet-Track will continue to support charitable causes and will shortly announce their charity partner for 2014.

To find out more about Macmillan Cancer Support go to http://www.macmillan.org.uk