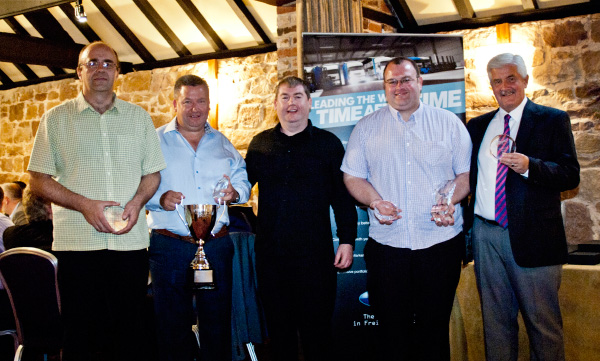 Morley Hayes welcomed Pallet-Track members and sponsors back to their championship golf course in Derbyshire for its eighth Annual Golf Day. 16 four-ball teams played off two tees under Stableford rules on the PGA championship course and this year also included a putting competition.

The winners this year were The Mockney Cockneys the team was made up of 2 shareholder members which included Peter Eason, Russell Newman, Rodney Jenkin and our very own chairman John Allen. They won with a very impressive score of 107!!

The other winner’s on the day were James Ward who won nearest the pin, James who plays off 1 would like to become a professional player one day. Dave Willis from the iDM team won the longest drive and by a very big margin, no one could touch him. Harry Knight who won the putting competition was considered by most to be the rising star on the day, Harry played some very impressive shots and at 14 playing off 6 is one to watch.

The runners up were the Interhaul team which incuded Mark Waite, Richard Williams, Dean Sargeant and Stan Devonish.

The golf day was supported by Towergate Vigo and Deker. Towergate sponsored the ninth hole supplying refreshments for all of the players and also supplied some of the raffle prizes, Deker sponsored the tables and Vigo supplied raffle a prize.
Once more support from the shareholder members who were unable to come on the day was very good indeed, we managed to sponsor every hole on the course and match last year’s sum for monies raised making a total this year for our chosen charity of £6000.

Pallet-Track would like to thank all of the players and the sponsors it was a great day played in a great place and even though the rain came down it did not deter the enthusiasm of the players or the staff at Morley Hayes.
The hole sponsorship on the day is fundamental to the success of the day for our charity and we would like to say a special thank you for all of our members for their continued hole sponsorship.

If you would like to find out more about the Macmillan Cancer Support, you can go to – http://www.macmillan.org.uk/Home.aspx