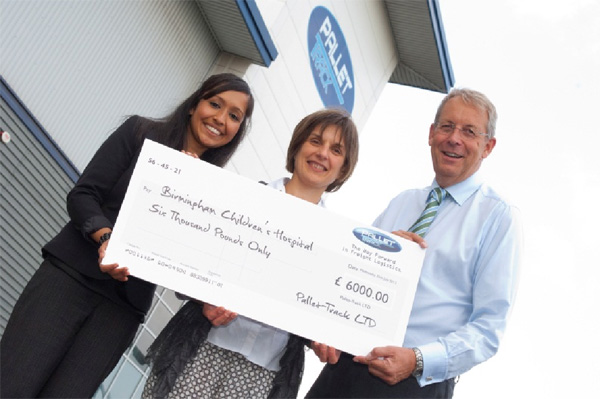 Pallet-Track celebrated its 8th Annual Golf Day on the 17th May, welcoming members and sponsors once again to the immaculate surroundings of Morley Hayes Championship Golf Course in Derbyshire.

The competition played under stable ford rules and out on the PGA Championship Course featured 16 four-ball teams playing off two tees.   The eventual winners came from Depot 08, courtesy of Courier Logistics.

This year’s event was held in support of Birmingham Children’s Hospital who is Pallet-Track’s adopted charity partner for 2012; £6000 was raised for the charity on the day and was donated to the oncology children’s ward.

Birmingham Children’s Hospital has just launched a new campaign to raise £4 million pounds for the Children’s Cancer Centre Appeal and the star of this campaign is 8 year old Abigail Alessi.

The appeal is the biggest to date for the hospital and aims to improve the lives of the 3000 cancer patients and their families who are treated at the hospital each year transforming the cancer unit facilities and accommodation.

The current unit is over 30 years old and the service has outgrown capacity. The £4 million will enable the hospital to increase space around patient’s beds, provide better communal areas for families and improve the outpatients’ area.

Abigail who fronts the campaign is being treated for Ewings Sarcoma, a very rare type of bone cancer that only affects around 30 children in the UK every year.

She wanted to be involved with the Children’s Cancer Centre Appeal to raise awareness of the lifesaving work of the hospital to encourage people to donate. Her picture will be on billboards across the city.

We would like to thank all of the participants on the day and would also like to thank the hole sponsorship form the other depots.

Shahaji Sattar Corporate Partnerships Consultant and Jacky Hotchin, Clinical Lead Nurse from Birmingham Children’s Hospital came along to the Pallet-Track hub to collect the donation which was presented to them by Rob Eaton Pallet-Tracks Finance Director.

If you would like to find out more about the Children’s Cancer Centre Appeal, you can go to http://www.bch.org.uk/cc_splash.php