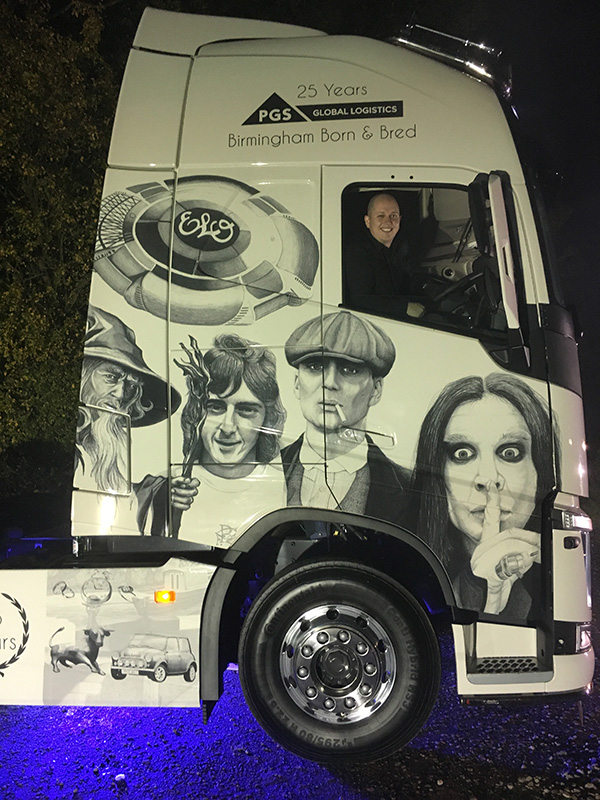 Pride in where you’ve come from and where you’re going to provides the theme behind a silver anniversary tribute cab mural to Birmingham, as commissioned by PGS Global Logistics which was ‘born and bred’ in the UK’s second city 25 years ago.

The mural on the side of the latest Volvo Globetrotter tractor unit, which captures Birmingham icons including Peaky Blinders, the Electric Light Orchestra (ELO), Lord of the Rings and 70s football icon Trevor Francis on one side and cityscape landmarks such as the futuristic Selfridges store and the Rotunda on the other, tracks the progress of innovation, creativity and the entrepreneurial spirit that was the cradle of the Industrial Revolution and also gave birth to PGS Global Logistics.

“Birmingham is where it all started so the city is very important to us, we wanted to mark that in some lasting way for our 25th – it’s a real head-turner,” said PGS commercial director David Bayliss, whose artist nephew David Churchard spent 100-hours hand-drawing the mural.

“It was just 25 years ago that managing director Paul Eyles collected his first consignment from Carrs Tool Steels in Smethwick to deliver to London. He was a one-man operation starting out then and now the business employs 220 staff with a global reach.

“Since then this family-owned business has grown and expanded with the same personal service, values and attention to detail as that first delivery. We may be a bigger player now, but still remember why Carrs trusted us then and still trust us now, to get their goods there intact and on time.”

PGS Global Logistics, which has its headquarters in Kitts Green and a warehouse in Kidderminster, is a long-serving members of the Pallet-Track network covering the West Midlands.

Nigel Parkes, managing director and founder of Pallet-Track, which is based in Wolverhampton, said: “The mural demonstrates the personality behind this well-oiled machine that has served the CV postcodes for us for   more than a decade. We wish Paul and team continued success for the next 25 years.”

Picture caption: Artist David Churchard sits behind the wheel of the PGS Volvo Globetrotter he has transformed into a tribute to Birmingham.