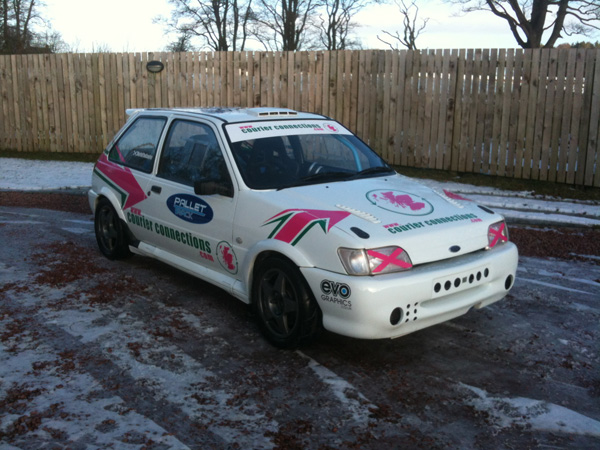 Courier Connections Hit the Track this month with the Courier Connections Fiesta and a classic Subaru Impreza Sti, the team of four drivers took the two cars down to Knockhill Racing Circuit in Fife which has been operated by current owner, Derek Butcher, since 1983. A fast moving and dynamic business, Knockhill prides itself with the reputation as the friendly circuit with an open and inclusive attitude towards motorsport.

Martin Mc Geough and the team take part in the hot hatch and open track day events held at Knockhill racing circuit, it’s an all-day event which normally runs from 9am till 5pm apart in the winter months when the times have to be amended as daylight saving becomes an issue.

The Courier Connections team are planning to host some entertainment days this year at Knockhill racing circuit. The track day events are held monthly throughout the year, they expect the first entertainment day will be held around April/May when hopefully the weather will be better.

The first outing was planned for the 10th Feb but was delayed because of the bad weather and the Courier Connections team went out for the first time on the 9th March, to see Martin and the Impreza in action and check out the Knockhill racing circuit follow the link belowhttp://www.youtube.com/watch?v=YQi2py78SSM

Next outing is on the 24th March, the team are spending all there time repairing the Impreza as Martins friend Mick gave it a bit of a bump last week, there is still bit to do but the Courier Connections team are hoping to get both cars out on the track by the 24th.