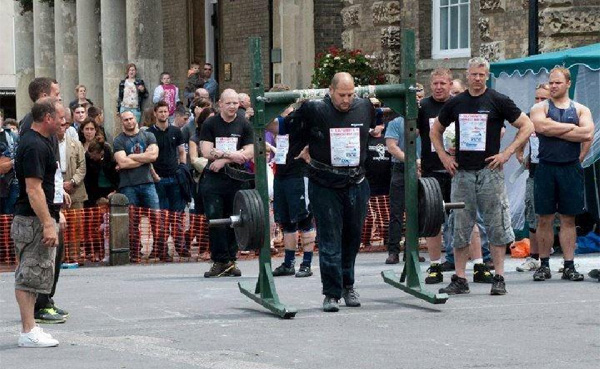 Pallet-Track has it very own strongman within the network, Craig Downes from Downes Transport Ltd Depot 86 recently took part in the Salisbury’s Strongest Man 12 and took third place!

Sherree Middleton, Craigs Partner gave us the heads up on Craig’s journey to the Strongest Man 12, it was initiated by their daughter Bella, as Bella has got older, now aged 5, Sherree and Craig decided that both needed to be fit to keep up with her.

Craig initial main aim was to lose weight and to stick to a healthy diet, so in December 2011 supported by his whole family and a plethora of close friends a healthier life style for Craig began.
As Craig got a bit fitter he joined local gym in Amesbury , his enthusiasm for it grew so quickly that within  a couple of month’s felt that he needed to go to a bigger gym with more equipment. Craig moved on to his next gym called “my gym” based in Salisbury.  The gym based in Salisbury pushed him a lot harder, gave him excellent advice and one to one training, forcing Craig’s training team to spot his potential.

The team stated that he had such natural strength that strongman competing would be an ideal sport to get involved in; Craig took up the challenge and has been going to the gym 6 nights a week.
The training has been full on but it has been a massive achievement for Craig losing nearly 4 stone in weight, and coming 3rd overall out of 15 highly acclaimed competitors.

Craig also entered the competition to raise awareness about a charity called “Lucy’s days out” a Salisbury based charity that provides children living with cancer fun days out.  The Charity will provide days out, expenses and support for families living with cancer, predominantly they help families in the Wiltshire, Hampshire & Dorset areas, Craig raised over £900 for the charity on the day.

Pallet-Track were represented on the day by Luke Cradock, who went along to support Craig during his challenge, Luke said it was a fantastic day out and great to see Craig get third place.
Craig is still training as there are several more events throughout this year, so look out for our Pallet-Track Strongman and if he is local to you go along and support him for a great day out.
To find out more about Craig’s gym and their facilities go to http://www.mygym-salisbury.com/salisbury/

If you would like to find out more about “Lucy’s days out” you can go to http://www.lucysdaysout.org/.