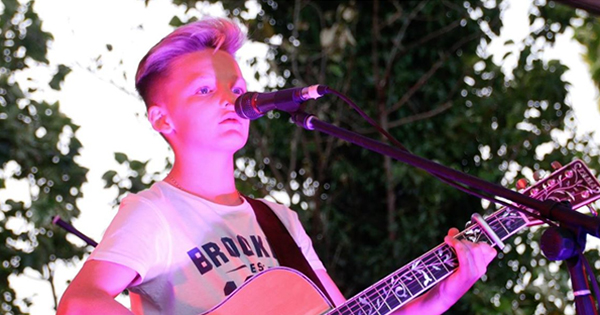 Many school boys fantasise about a successful music career, but few can match the overnight exposure of 15-year-old busker Alfie Sheard.

The schoolboy was not only talent spotted singing in the streets in Yorkshire, but soon found himself on the other side of the Atlantic feted by the likes of Ed Sheeran and US chat show host Ellen Degeneres.

The eldest son of John Sheard, owner and managing director of haulage company JMS of Doncaster, a Pallet-Track member, Alfie has a passion and drive to go into the music industry and spends his weekend busking in and around south Yorkshire.

So good were his cover versions, that a talent scout for the Ellen Degeneris Show had him flown to Los Angeles where he was not only interviewed by the celebrity host, but was given encouragement and a guitar by hero chart-topper Ed Sheeran who had also heard his material.

Since his appearance, Alfie, who has been playing guitar since he was 11, has also appeared on ITV’s This Morning, hosted by husband and wife Eamon Holmes and Ruth Langsford, but, unphased, has since returned to the Yorkshire streets where it all began.

John Sheard said this week: “I am absolutely over the moon for him. What is also great about Alfie is the fact that he has a real drive, but is also very grounded. He wants to follow a musical career but wants to concentrate on his exams and finish his schooling first.

“He is also very independent. He has always wanted to earn his own money and has been busking around for the last nine months, under the supervision of an adult.

Alfie has also been offering himself out to private functions such as weddings and parties. He has been doing this for around 18 months now and has built up a huge local following.

“There has been a lot of interest in him – I have had a call from the likes of Sony Records. I am sure he will be really successful in the future.”

John Sheard added: “I can’t claim any credit for Alfie’s musical talents, but his drive reminds me of myself when I was a teenager.

“I bought a van when I was 18 and through sheer determination, I was able to build a successful business. I am 46 now and in charge of a nationwide business with 35 trucks.”