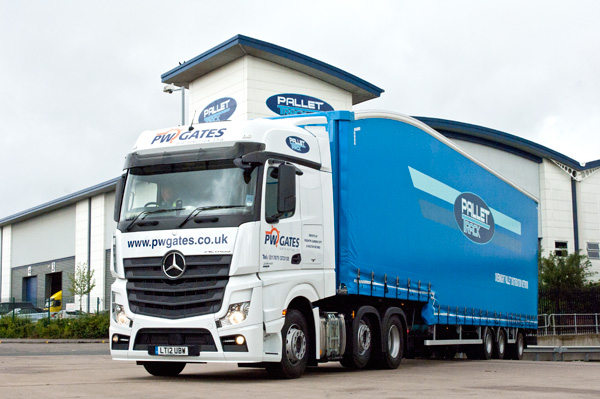 Within just two weeks of setting its first New Actros tractor units on the road, Pallet-Track network member PW Gates Distribution was recording mpg returns comfortably ahead of the seven per cent improvement it had hoped for.

The Hertfordshire-based operator runs 32 trucks, a combination of 44-tonne tractors and rigids of various sizes, among them a pair of 18-tonne Mercedes-Benz Axors. The two latest arrivals are both New Actros 2545LS models with BigSpace sleeper cabs and 450hp Euro 5 engines – they are only tractors on the PW Gates fleet to wear three-pointed stars, but performing so impressively that there is every prospect of the company adding more.

A high-profile supporter of the FairFuelUK campaign, PW Gates runs 11 trunks a night from its headquarters in Welwyn Garden City. Its vehicles, most of which make for the Pallet-Truck hub in Wolverhampton, pull high volume, double-deck trailers.

“The fleet average on this work is around 9mpg, and sometimes a little bit less,” said Development Director Chris Lynch. “By contrast, our two New Actros are in the high 9s.

“What’s even more impressive is that whereas previously you’d have to put at least 50,000km on a truck before you started to see an improvement in fuel economy, these Mercedes are still only a couple of weeks old!”

Supplied by Hatfield dealer S & B Commercials, each New Actros is the subject of a two-year Mercedes-Benz Financial Services contract hire agreement. “It’s a very good deal, competitively priced and with repair and maintenance tied up as well,” said Mr Lynch. “This means we can budget with confidence knowing there are no nasty surprises around the corner.”

“They delivered an impressive presentation and now the trucks themselves are more than living up to our expectations,” continued Mr Lynch. “Our drivers are delighted too – they love everything about their New Actros. From its comfort and space, to its styling and huge amount of storage, this truck really is a driver’s dream.”

Privately-owned PW Gates offers a comprehensive range of storage and distribution services. Voted Pallet-Track’s Best New Depot of the Year 2010, the company has extensive multi-functional warehousing at Welwyn, and also operates from a second location in Milton Keynes.

One of its New Actros is pulling a 15.6m Lawrence David curtainsider, the first to be purchased by the operator since the Government launched its much publicised, 10-year trial of extended length trailers.

Mr Lynch added: “With margins in the logistics industry under so much pressure we’re always looking at ways of reducing our costs, the biggest of which is fuel.

“If mirrored across the entire fleet the mpg savings currently being achieved by our two Mercedes could make a huge impact on our bottom line. So while these are still early days, I have a strong feeling that when we next come to replace some trucks we’ll be doing so with more New Actros.”

Additional PW Gates coverage can be found at the sites listed:
http://www.mhwmagazine.co.uk/LatestNews/Gates_wide_open_to_New_Actros_fuel_savings-12339.html