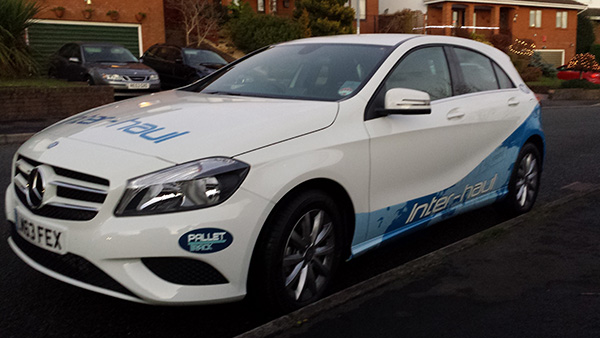 Interhaul have recently made a very firm commitment to Lewis Robling who plays for Newport Gwent Dragons regional team by presenting him with a new Mercedes, Mark Waite managing director of Interhaul is a huge rugby fan and has followed Lewis’ career.

Mark knew of the potential in Lewis from a very young age – Lewis’ mother and partner are personal friends of Mark’s, they have known each other since childhood, also Lewis like Mark is an ex player of Caerleon RFC who have been sponsored by Interhaul for the past 13 years, Mark along with other staff members at Interhaul are ex members of the Caerleon RFC team with one of them, Mike still having the occasional run out.

Lewis born 3 October 1991 after playing for Caerleon RFC became a member of the Dragons Academy. He went on to represent Wales in the Under-20 squad, debuting in the opening game of the Junior World Championship against Argentina.

Lewis made his Dragons debut away at Glasgow Warriors, starting in the centre, in October 2011. He went on to appear in the first 2 rounds of LV= Cup games in October, including the last-gasp win at London Wasps.

Lewis has since played in excess of 36 games for the Newport Gwent Dragons and has previously played for Newport RFC. His usual position is Centre or Fly half. He is a skilful ball player and a valuable passing and kicking option, this skilful play is finding him in the Dragons match day squad on a more regular basis.

The Lewis Robling family have a sporting history but on the side-lines of the pitch, Lewis is the Grandson of the former BBC commentator Idwal Robling who was part of the Great Britain football squad for the 1952 Summer Olympic Games in Helsinki.