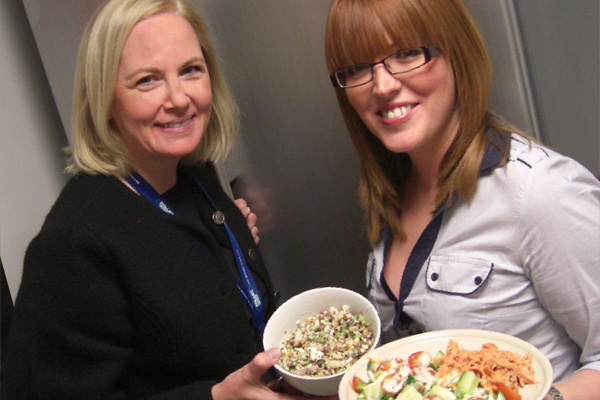 Despite terminology such as ‘lean logistics’, the haulage and distribution industry is not normally associated with healthy eating – in fact quite the reverse.

Personnel involved in the supply-chain are more likely to ‘munch on the move’ than sit down for a proper balanced lunch.

As Britain’s companies take ‘food for thought’ and look to replicate the feel-good factor from the Olympics and Paralympics, one Midlands business has proved to be strides ahead in getting staff to look after their health and waist lines.

Pallet-Track, a Wolverhampton-based national pallet network has offered its staff free breakfast and lunch, providing they chose from the healthy options on the menu. Free healthy drinks are also on offer throughout the day at the national hub in Millfields Road, Wolverhampton.

There is not a chip or fatty pie in sight as diners can only tuck in to the likes of jacket potatoes, fish, vegetarian options, yoghurts, salads and fruit. If they want more calorific pies and pasties, they have to go off-site and pay for it themselves.

This is no quick-fix fad to capitalise upon the Olympic effect – the initiative has been running for more than five years – but a sustained effort to ensure staff look after themselves and take the right breaks.
Nigel Parkes, the founder and managing director of Pallet-Track, which is looking to more than double its workforce across the network over the next five years, said: “I read a report years ago that said more than 80% of staff do not have a healthy lunch and are more likely to grab a snack at the desk or on the move.”

“As a service industry, we depend upon our people and we want them to take regular lunch breaks and eat properly to help them to do their jobs better in a more stress-free environment. We have run this free healthy eating project for more than five years and it seems to work, despite the fact that we work in an industry that is no stranger to poor eating habits.”

Nigel Parkes, who has trebled the size of the business in less than a decade, said: “I admire the Midland founding fathers such as the Cadburys who invested in their people and ran successful businesses as a result. We no longer have to build social housing for our staff, but we can invest in their welfare in small, but meaningful ways and this has paid dividends because we have one of the lowest staff turnover rates in the industry.”

“Profitability is of course important, but it comes from taking a long-view and creating the right business ethos and instilling a sense of loyalty and not having to re-train people to replace those who have left the business because they did not feel valued,” adds Parkes.

Business at Pallet-Track is growing as the company broke its own record for the number of pallets passing through the Wolverhampton hub in a single night – to more than 9000. This is more than a 1000 per cent increase in the eight years it has been at the location.