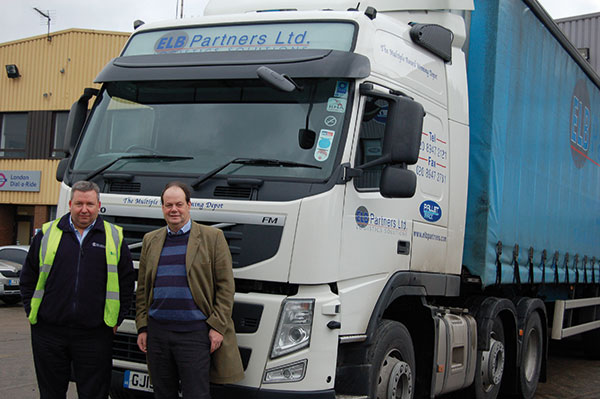 Stephen Hammond gets taste of what navigating a 44-tonner around London is like with ELB Partners.

Transport minister Stephen Hammond MP today went on the road with Wimbedon-based ELB Partners to witness what it is like to be a truck driver in central and south London.

MD Peter Eason, Pallet-Track’s shareholder member took Hammond on a three-hour journey in one of the firm’s 44-tonne artics today (31 January), to help him see the challenges operators face when delivering in the capital, particularly highlighting the company’s concerns with cycle safety.

The operator also raised concerns about the financial cost of fitting cycle safety equipment to vehicles that deliver in London, and suggested a reduced Congestion Charge rate for a couple of years for vehicles with the equipment would help hauliers gain back some of the cost.

Eason welcomed London mayor Boris Johnson’s Safer Lorry Scheme, which will ban all vehicles over 3.5 tonnes without sideguards and additional mirrors from entering the capital.

“If it saves a life then that’s fantastic,” he told Commercialmotor.com. “There’s no reason why every 7.5 tonne vehicle upwards shouldn’t have sideguards and mirrors.”

The company has fitted all vehicles in its 40-strong fleet with cycle safety equipment, including cameras, audible left turn signals and sideguards. All of its drivers have also completed urban awareness training as part of their Driver CPC.

However, Eason argued that he would like to see mandatory training for cyclists, especially those who break the law.

“When they are stopped for jumping a red light, rather than a £60 fine, send them on a day’s training,” he said.

Eason also spoke to Hammond, who is the firm’s local MP, about the lack of young drivers in the industry and suggested a government-led apprenticeship scheme would help attract more young people into road haulage.