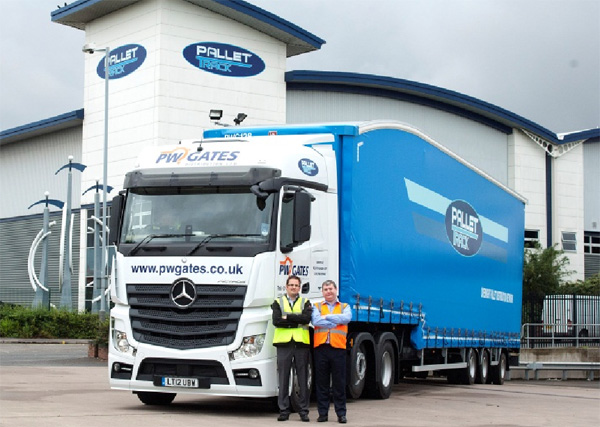 All board the double-decker – New Pallet-Track Network Trailer making saving of up to 20% per payload forms part of Government road trial to cut congestion.

A business model that has defied the economic downturn with double-digit growth throughout the recession has launched its latest weapon as part its bid to boost the UK’s biggest palletised freight network.

Welwyn Garden City based PW Gates Distribution, part of the UK-wide Pallet-Track network, has unveiled its new Mercedes Actros tractor units and a new 15.6 metre double-deck trailer, an investment that will increase its payload by 20 per cent as well as dramatically reduce costs and increase operational efficiencies by allowing eight standard size pallets and up to 16 lighter ones per payload.

With less than 2000 on the UK roads and being longer than the conventional trailer, the PW Gates’ unique double-decker is part of a national Government performance and safety initiative which is being monitored by VOSA. The 10-year pilot could determine if the trailers will become the norm on the UK A roads and motorways as part of a drive to reduce congestion.

Managing director Peter Gates, said: “We are one of a few companies that have successfully applied for and obtained the special licence to operate these longer trailers that will run overnight between here and the Pallet-Track hub in Wolverhampton. We report every detail on performance and fuel efficiency back to the Government and if the trial is deemed a success, they could become the norm as businesses strive to reduce costs without compromising performance. Although they are bigger, the larger payload means that fuel consumption will remain about the same, but with greater efficiency.”

Chris Lynch, PW Gates’ business development director, added: “As an organisation we have to be ahead of the game and invest in our systems and our infrastructure. We also need to optimise our transport operation and look for that angle that gives us a competitive edge. Getting costs down in today’s climate is key. Part of this strategy is a more efficient utilisation of the fleet and investment in new equipment as well as taking advantages of new opportunities.  The ability to operate a new longer 15.6 metre double deck trailer represents just such an opportunity. And, it’s in line with our pioneering attitude here within the Gates organisation.”

“The additional carrying capacity means that vehicle movements can be reduced by about 20% when comparing the longer 15.6 metre trailer capacity to a conventional 13.6 metre. So, operating this longer trailer means a significant cost reduction in what is the most costly part of any logistics chain – the transportation.”

The new 15.6 metre trailer, supplied by Lawrence David in Peterborough, has an overall height of 4.88 metres. The curtain-sider has wrap around rear curtains (the Lawrence David ‘Maxcess’ design system) which maximises rear access capabilities and means significant time is saved in the loading, unloading and the scanning process versus the standard trailer.

The trailer uses a self-steer configuration and the rear most axle is a BPW 27 degree self-tracker.  The rear axles run on 245/70R17.5 tyres keeping deck height as low as possible (1.0 metre loading height) and leaving maximum internal height availability (over 3.7 metres internal height).
The current PW Gates fleet consists of 15 tractors, 32 trailers and some 17 rigids and a couple of vans for those really urgent deliveries.

Chris Lynch added: “We expected that the trailer would be a replacement for one of our existing 13.6 metre rigs, but business is such that the trailer is needed to expand our operation so it is additional to the fleet we already had. Our business, supported by our Pallet-Track business partners, has grown beyond our expectations and now we’re looking at additional capacity, over and above what we already have, to cope with the usual expected Christmas rush. Although it’s only mid-Summer, we need to plan for the increase in business that’s just around the corner”.

“Every operation is different but, in the long term, 13.6 metre trailers will virtually disappear from our roads. Those that weigh out before cubing out will go for the 14.6 metre length and others, like us that cube out before weighing out, will go for the longer 15.6 metre. In the end, it’s just down to simple economics.”

Nigel Parkes, Managing Director of Wolverhampton-based Pallet-Track which has trebled its size in less than a decade, said: “We have more than 70 partner organisations around the UK, all of which strive to innovate in their own local and regional markets and look to our broader network to maximise that competitive edge. The ability to deliver more through this new trailer is a significant development for PW Gates and the network as a whole.

“Last month we broke our own record for the number of pallets passing through the Wolverhampton hub in a single night – to more than 9000. This is more than a 1000 per cent increase in the eight years we have been at the location and I can only see the figure continue to improve with developments such as the Gates/Lawrence David trailer systems”

Pallet-Track also last month announced plans to further expand its operation and the doubling of jobs over the next five years.

“The palletised freight network is a model by which many major brands are looking to optimise their supply chains because of the competitive advantage it brings over other distribution methods and its ability to reduce costs and empty running on Britain’s motorways. The new trailer unit will help businesses to sweat their assets even further at a time of high fuel costs.”