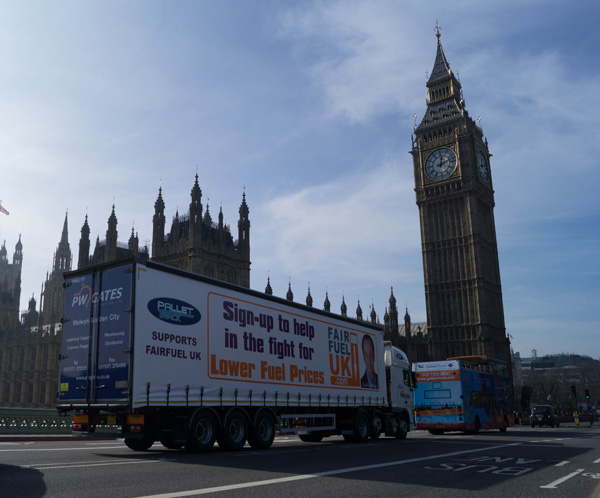 Pallet-Track along with one of its network shareholder member – PW Gates showed overwhelming support last week for the FairFuel UK campaign, by hitting the streets of London with the FairFuel UK truck to highlight the event that took place at Portcullis House.

The event on Monday 4th March was something of a ‘first’.  A lot of lobbying of MPs is generally done either by organising lots of 1 to 1 meetings with MPs or by holding an event (lunch/reception).  Such events can suffer from the problems of there being lots of events on lots of issues and MPs picking and choosing what to go to.

On Monday FairFuel UK decided to do their lobbying a bit differently!  By going into room T of Portcullis House from 1pm to 6pm and asking MPs to literally ‘drop in’ to register their interest and support in FairFuelUK.

The Portcullis house event offered MP’s the opportunity to meet Quentin Wilson and the team and some of the FairFuel UK supporters. As a drop in event, it means it’s easier for an MP to ‘fit in’ a visit.
Peter Carroll commented “We are all thrilled that the liveried vehicle was in Westminster, I’m absolutely delighted to be able to report that over 100 MPs attended.  This far exceeded our expectations. They came from all across the House and I don’t think I’m exaggerating to say that there was a huge degree of support and ‘warmth’.

Lasting 5 hours it was considered by the team to be extremely worthwhile, 40 of the MPs felt able to sign a ‘Letter to the Editor’ that we had drafted to go to The Times which calls for a cut in fuel duty!  I think some of them may feel some ‘heat’ from their respective Party whips if the letter does indeed get printed.

Nigel Parkes managing director of Pallet-Track says it is important to increase awareness since the creation of the organisation, fuel increases have been postponed. This is not a coincidence. They presented a comprehensive report to Government which clearly shows how fuel duty increases seriously damage our economy. To that end we have agreed to be a sponsor via the Association of Pallet Networks, I encourage everyone to support them whenever they can.

Peter Gates from PW Gates was onsite at Portcullis House, to talk to MP’s from a haulier’s point of view. Peter feels that the continued rising fuel costs are the one thing that a business like ours has little control over, we can shop around for other products to try and stop the squeeze on our profitability but fuel costs are always lowering the margins. I believe that the cut in fuel duty will help improve the UK Economy as has been evidenced by FairFuelUK’s Fuel Duty report carried out by the CEBR in March 2012.