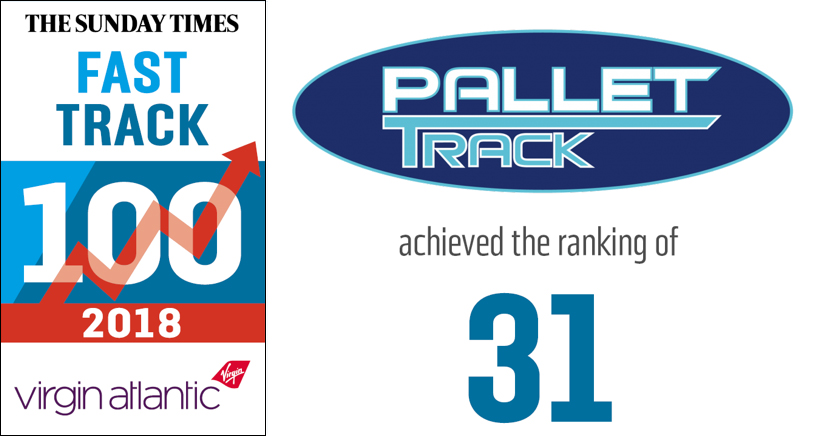 Logistics business Pallet-Track has been officially named as one of the UK’s fastest growing companies in the Sunday Times Virgin Atlantic Fast Track 100 listing – a plaudit that will be published in the national newspaper this weekend (Sunday December 2).

This is the second year in a row the Wolverhampton business – ranked 31 – has secured a place in the listing that is supported by Sir Richard Branson and will involve a presentation at his Oxfordshire home in May next year.

Last year, the company also made the grade, as well as scooping a series of awards and accolades in the past 12 months.

In September Pallet-Track scooped the Growth Award at the 2018 Logistics Awards, organised by SHD Logistics at Shakespeare’s Globe Theatre in London.

In May the company was once again identified as one of the London Stock Exchange’s ‘1000 Companies to Inspire Europe,’ and became one of only six companies nationally recognised as such for two consecutive years.

Back in June and on home turf, Pallet-Track secured the Wolverhampton Express & Star Business of the Year Award.

Nigel Parkes, founder and managing director, said: “I’m extremely proud of what we have collectively achieved during 2018, which has been a year of awards and accolades for Pallet-Track.  The recognition we have received reflects the hard work of the team and the network which I am delighted to say will continue to grow into 2019 and beyond with even more new members coming on board.”

In the last 14 years, the £83 million turnover business, which comprises 86 member companies, has handled in excess of 22 million pallets and has never lost a single consignment at its 267,000 sq ft Wolverhampton hub or at its two newer hubs near Wigan, Greater Manchester, and Welwyn Garden City, servicing the capital.