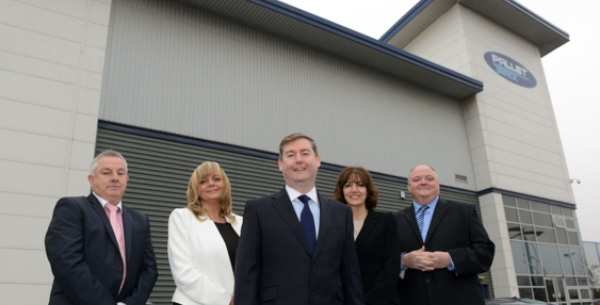 Pallet-Track has won its second national award in as many months.

The reputation of leading logistics provider Pallet-Track continues to stack up after it added another national award to its trophy cabinet as its 10th anniversary year approaches its zenith.

After securing the Midland’s regional title in the British Chamber of Commerce Awards 2014 earlier in the year, the Wolverhampton-based company scooped The Best Use of Technology to Improve Business Performance at the business organisation’s national awards during a glittering ceremony at Tower of London in front of 550 corporate guests

Pallet-Track’s national network makes extensive use of technology to maximise efficiencies to its UK-wide operations, recently opened a southern hub to deliver directly to the Capital and cut 500,000 miles a year from its transport costs, as well as its carbon footprint.

Nigel Parkes, founder and managing director, added: “It has been a fantastic 10th anniversary year for the business and securing these two awards in as many months underlines the efforts of every team member.

“This recognition comes at a time when we have opened a London and Scottish hub to maximise efficiencies as the network and demand for our services continues to grow. We have also just moved into Europe through our tie up with Hellmann Logistics Worldwide. On our first night of trade in 2004 we managed 800 pallets, but our growth now shows over 10,000 pallets every night – and we have never lost a consignment, which is unparalleled in this industry. The Chamber award is a testament to our use of technology – and to our people.”