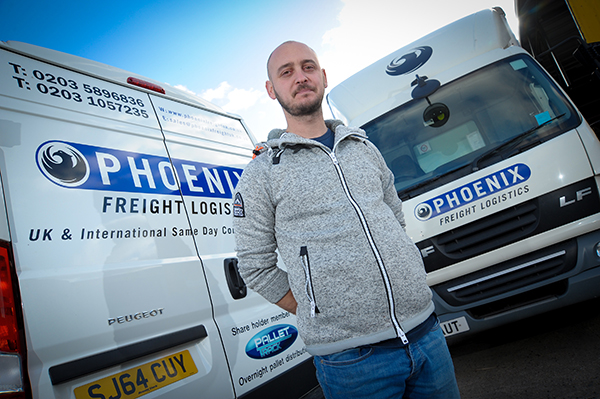 An Essex-based business specialising in transporting printed material has already taken on 60 new customers and increased staffing numbers three-fold since it became the latest firm to join the Pallet-Track network.

Established in Barking in 2013 by Ryan Wicks with a single Citroen van, Phoenix Freight Logistics has since expanded into a larger fleet of four vans and four lorries.

Six years ago, Ryan had given up his job as a lithographic printer in order to go to Australia. While he was waiting for his visa to be granted, he started helping out at his father’s business, Falcon Print Transport, by streamlining and updating its customer service operation.

Such was his success that the notion of going to Australia was abandoned and, by initially taking on Falcon Print’s excess workload, he became a successful transport operator in his own right.

Using its unique local knowledge, Phoenix covers the IG and E postcodes area on behalf of the Pallet-Track network.

The increase in business generated by joining Pallet-Track has enabled Ryan to expand his workforce from three people to nine, with plans to recruit yet further in the near future.

An enthusiastic Ryan said: “We’re delighted to be part of the Pallet-Track network and we’re already seeing the benefits. We’ve found them to be very supportive and their systems are flawless.

“It has opened a lot of doors for us. We’re a small fish in a big pond – we’re practically Nemo compared with the size of some of the other hauliers, but we’re punching well above our weight!”

Pallet-Track, which was founded in 2004, recently recorded its 20 millionth pallet milestone.

Founder and managing director Nigel Parkes said: “Phoenix Freight Logistics is a small but first-class company and they make a welcome addition to the Pallet-Track network.

“We see innovation, best practice and hard work taking place at all of our members every day, and Ryan fits right in. He has already demonstrated his skill and tenacity in growing his firm eight-fold in just four years.”